If you’re wondering why it’s been a little while since there has been a long blog post, it’s because we have been busy!

One of the things we’ve been working on is recording music. Demo versions of both “Clouds” and “In a Minor Key” were released to SoundCloud a few weeks ago. If you haven’t already had a chance, please take a listen. I’m very proud of the songwriting on both, but they are very different feels. I would really appreciate it if you sent me your thoughts.

One of the key reasons I’m asking for your thoughts is that I’m about to do something with both songs that I haven’t done before. Terrance Reeves – who is a musician, a producer, and a friend – will be taking possession of the original tracks over the next couple of days with an eye towards mixing them properly, and turning them into final products. My vision is that these two songs (along with five others) will eventually become an EP for my favorite songs from the last year.

Getting this done has already been a little bit of an adventure as apparently I have not been updating my recording software as often as I should. In my initial effort to try to get the tracks ready for Terrance yesterday, I was presented with an update for one piece of software that then crashed the core StudioOne engine. It is at times like these that

1) I am thankful that I back everything up to the cloud, so no original recordings would ever have been lost, and

Short story – everything is back to normal, and now I have a newer and slightly more capable recording system than I did two days ago, with no damage, and with only minimal out-of-pocket outlay to fix the problem.

There’s also a lot going on for us on the live music scene – which is not quite the same thing as the in-person music scene, although there are glimmers of hope here as well. For example, our dear friend Andrew Geano is starting to play out again in New Hampshire – open air and socially distanced, but still live and in person. Tim Ko has a similar set of situations, and the links here will take you to their pages.

As for me, I have now two regular gigs and a couple of upcoming specials.

First, I will be playing at 2 PM on Father’s Day (Sunday, June 21) at the Music Salon. Linda Marks has invited me to do a set, which I am very happy to do. This set might be a little different from my usual sets because I’ll be playing from a slightly different location – should be fun.

Next, the two regular gigs: Tuesdays at 8:30pm I play the Apocalyptic Open Mic, and I’ve also just added a Friday afternoon gig (5 – 5:30) at Eagles Nest Revisited. Very grateful to Jay Singing Spirit Cunningham for including me in the latter!

Last, but certainly not least, this coming Monday, June 22 at 7 pm we will be hosting our sixth Virtual Necessity Open Mic session. Do you sing? Write songs? Write poetry? Haven’t had a chance to perform in a while? Please sign up and join us. You will be among friends.

Thanks, and I really look forward to seeing you all in person soon.

Hi everyone. Relatively short post here today. I want to remind y’all that I will be playing some music live this Friday night at 8:30 Boston time on Facebook live. Here is the link to join in. I’d love for you to stop by to listen to some old familiar tunes and maybe a couple of new ones, and I also hope that you will consider clicking here to make a donation to the Glioblastoma Foundation, which does a tremendous amount of good work in caring for glioblastoma patients and working to develop better treatments.  When (not if, I’m certain) the disruption and risk of the current pandemic subside, the doctors and researchers looking to beat diseases such as these will still need our help to do their good work. So please – for the sake of Donald, Neal, Gord, and tens of thousands of others past and present, give what you can. (There are also links on the Tunnel 18 facebook page)

Thank you, and I promise I will spend our time together on Friday in a spirit of celebration. And I will look forward to seeing all of you in person and singing together very, very soon!

Tunnel 18 first played live during the summer of 1989. We missed our chance at a true 30th anniversary reunion, and in fact a true reunion sadly isn’t in the cards anymore. However, I do want to take some time not only to play, but also to remember some of the songs we wrote and played together, as well as showcase some of the things I’ve been working on. May 29 will be a series of originals and covers of the type that we used to play when we performed live … the kind we played by the pool in Donald’s backyard or over at Dione Rice’s house.

I’m hoping that this will be as meaningful for you as it will be for me. Just the sheer fact that there is live music is something that has provided a level of comfort.

I don’t know about you, but I am still very much in an unsettled place with the pandemic, and the efforts at social distancing and confinement. Even during the simple act of trying to change the strings on one of my guitars I find myself asking “where is…” and as often as not the item I am looking for is in a suitcase, a guitar bag, or some other form of luggage that has been sitting under a bed for the past 10 weeks.

So much has changed since the last time I was on the road, and the last time we were all physically around friends. As I look at it now, any chance to be around friends, tell stories, make music, laugh a little – each of these is a precious reminder that we will get through this and we will be together again soon. And I can’t tell you how much I am looking forward to seeing you.

In the meantime, please enjoy a little bit of music. Here’s an incredibly eclectic playlist that you might enjoy. Really hope you can join me on May 29!

So, I promised you a longer blog post. Here you go.
Thank you for hanging in there while it is taken me some time to get some other items in order. Work, day stuff. However, I’ve also been immersing myself in as much music as possible: writing, performing, even learning.
First, there’s new music.  Remember that demo of “Clouds” I posted a few weeks ago? Well, it has formally been recorded, and I have added it to the SoundCloud site. (More on the new music bit a little bit later on in the blog)
Next, on the learning part. Learning is one of life’s great pleasures and rewards, especially when it means that you get to learn more about something you love and hopefully that you learn how to do more of it and do it better. Such is the case with voice and singing.

I have just started a short course in voice with my friend Danielle, who I met through the open mic circuit here in Metropolitan Boston. Danielle is an incredibly talented singer, songwriter, and playright.
(PS – She’s also got a great blog)
She’s giving voice lessons virtually during the COVID-19 lockdown.  To call me a reluctant singer is probably not right (I’m a guitarist, songwriter, etc, so singer comes with the package by default), but neither am I a natural.  So I welcome the chance to learn more about what makes my voice mine, and then how to learn to get it where I want it to go.
Danielle has been a great coach, and a lot of fun to work with.  Our lessons are also a wonderful break from the work week – again, really needed during these strangely interminable weeks.
All of this is also important as I have quite a few new songs on their way to being completed. All of the following have been recorded to some level or another:
All except “Minor” and “Train” were written in whole or in part during the lockdown, so I’m thinking of releasing all of them as something of an EP. 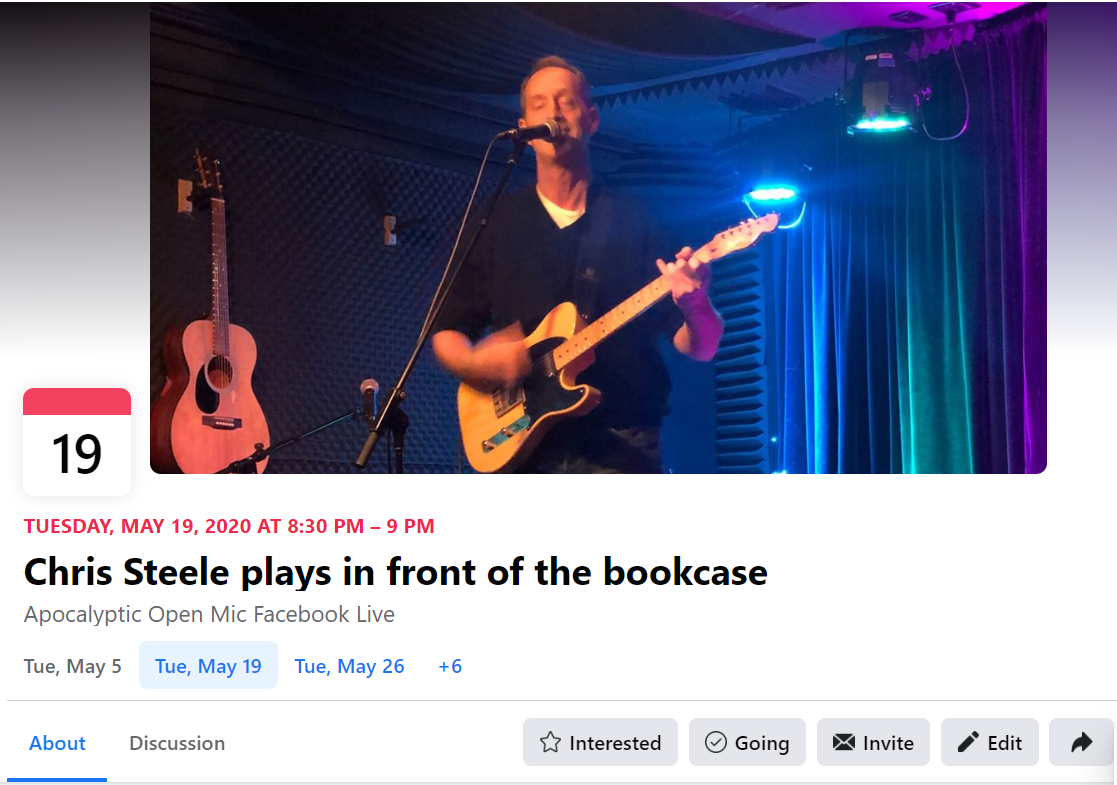 More on that as the story develops. However, in the meantime, I look forward to playing for you live again sometime soon. For now, please go ahead and join me on Tuesday nights at the Apocalyptic Open Mic. And I also will do a solo Tunnel 18 show very soon – maybe I’ll even pull a few really, really, really old songs out of storage!
-Chris

I am incredibly thankful for my life and the incredibly cool things I get to do. Yes, there’s all the travel and my family and friends and music and building stuff, but…

Last fall, I spent the day with some new friends on the Esplanade in Boston. My friend (and sometime spirit guide) Andrew Geano had released his first solo album a few months earlier and was looking to shoot his first video:

“Chris! Are you free on Sunday? I am shooting a scene for my music video for my song “Not That Free” on the Esplanade and I am gathering people I know to participate in it have a small little part that I thought you’d be really good for. You’d be playing a street preacher getting up in the face of the lead character (played by our friend Audrey Rose). It will be pretty simple stuff, and you won’t be mic’ed, and the your part will last no more than 15 seconds. If this is something that interests you, let me know. 🙂”

My response was a casual and nonchalant YES!!

The video was formally released yesterday and there was a release party at Sally O’Brien’s in Somerville, MA last night to celebrate. And if I haven’t already, let me recommend a few bands and let you know about the great music you missed from:

Thank you for being patient during a long absence – been an interesting few weeks, and I should be back on this blog a little bit more regularly now.  Without getting into details, I hope to be recording a few news songs, including one I started last night about how life flies by so fast.

I’m looking forward to being with you again soon. Thanks for joining me on the journey, as always.