On the road again, this time through Cleveland and then on to Toronto and Edmonton for the second half of the week.

While in the Cleveland airport, I had a quick moment of déjà vu, and then of revelation. In the picture to the side you will see an area where I spent an overnight in the airport in April 1993. I was returning to Chapel Hill, North Carolina from my first trip to California. It was a long set of flights, and I didn’t quite realize what I was getting into when I made the reservation.

At that time American Express would allow students to get one flight anywhere in the United States round-trip for $199. So, I used mine to go out to San Francisco to a meeting where I hoped I might also find a job. The flight out was easy, leaving from Raleigh and making one connection in Newark. The flight back was San Francisco to Denver to Cleveland to Newark to Greensboro. Once I arrived in Greensboro, my girlfriend at the time was to pick me up and drive me back to Chapel Hill.

The whole return trip was a “direct” flight, meaning I didn’t have to change planes, but it was more like riding a local bus route.

What I’d also failed to grasp was that the flight would shut down and overnight in Cleveland. Again, this is a concept I would understand (and prepare for) better in years to come, but I had no experience to prepare me for it. 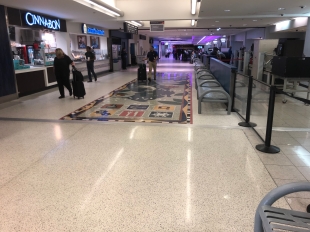 So, we got to Cleveland, they told us to get off the plane, get our bags, and check back in when the airport opened in the morning. Not realizing that this was part of the plan, and I had of course made no arrangements. So I slept right about where this picture was taken. And by slept, I meant dealt with a massive headache from not having eaten for the previous 24 hours except for the candy bar in Denver that gave me an initial sugar rush, followed by a migraine.

Morning came; I checked back in, and started off on my remaining flights. Got picked up by my then-girlfriend in Greensboro, met her parents for the first time (yup), and then drove back to Chapel Hill where I took a long shower followed by a long nap.

I tell the story because there were multiple points during that whole journey where I felt multiple flavors of “What’s going on? Why am I here? I’m completely screwing this up, I’m an idiot. If you screw this up, imagine what else you’re going to screw up.”

Walking through this part of the airport, that memory and those feelings came right back. And then I remembered they always go away.  It usually turns out that I haven’t screwed up, or have done so only very minorly. And if I screw up, so what? I’ve learned something. And then I do better the next time.

With all the storms that I’ve withstood, still don’t think that I’m damaged goods.

So, maybe a long way around to share that song with you, but I hope you also see from this very minor example of stress and recovery that the sun always rises the next day.   And then you get on the next plane and go to the next destination.