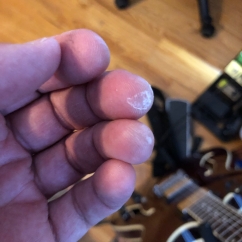 In other words, I am once again sitting in Massachusetts, but only for a short time.  The last two weeks were Edmonton and the Jersey shore, and next week is Berlin. I have actually spent the 4th here in the US, which has been a little bit of an unusual event for me, but there you go.

First, a little bit of a public service announcement:  If you’re going to try to play guitar 4-8 hours a day, perhaps do a little bit more for fingertip skin care than I have been doing. I was doing a bit of recording over the past two days and had to stop due to flaying (look it up).

Second, wow and oh my god it’s been a great few weeks of work and play!  Got to play three shows over a five day period in late June, doing about ten songs total.  Two locations in MA and one in AB, including playing with A BAND for the first time in years at the Leaf Bar in Edmonton.  All I can say is that “In The End” and “Caroline” sound excellent with a full band, and I hope you get to hear them that way soon.

I’ve also been working on recording yet another new tune (“In a Minor Key”) in the very slight open moments between getting on different planes.  And yet, it’s getting done. The Tom Petty influence on my songwriting is apparent, but there are also harder elements in there as well.

The song itself is another one of those gifts that just arrives.  The main verse progression just started playing itself – to the degree that I was wondering if I’d heard it elsewhere.  It’s in Am (a frequent key for me), so I decided to take a lyrical direction off of that. The chorus posed a challenge as the key chords did not seem to include the melody notes I wanted.  So… key change for a bar or two. And finally, a few bars of 2/4 mixed in with the 4/4 just to make the transitions interesting. Certainly allowable.

More again soon, but a question: I’ve been thinking that perhaps the Wayfinding album ought to come out as a Chris Steele work.  Tunnel 18 will always be there and I will pay it due honor and respect over time.  But Wayfinding has been my own little baby.  So….?